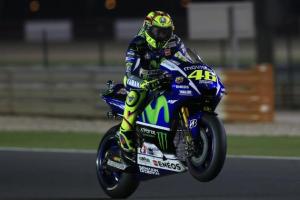 Valentino Rossi took his first win in Qatar since 2010

An enthralling battle in the opening race of the season saw an all-Italian podium, with Valentino Rossi taking the chequered flag for his 109th race victory. Ducati established themselves as a dark horse for the season with Dovizioso and Iannone completing the podium, leaving world champion Marc Marquez to settle for fifth.

Dovizioso had taken pole position, but many still doubted the Ducati’s ability to last race distance. Both Repsol Hondas started poorly. Marquez was forced wide at turn one, having to play catch-up from the back, whilst Pedrosa was swallowed up by the pack in the first turn.

Both Iannone and Dovizioso started strongly, split by Jorge Lorenzo. Lorenzo continued to dual with the Ducatis whilst Rossi edged his way past a bright Yonny Hernandez further down the field. The Yamaha had the pace throughout the track, but the sheer power of the Ducati meant that down the longest start/finish straight in the GP circuit, it entered turn one in the lead.

As Lorenzo, Dovizioso and Iannone tripped over each other Rossi closed the gap with consistently quick times, before passing and gapping Iannone. The leading group were four seconds clear of Dani Pedrosa and Marquez, who had shaken off the challenge of Cal Crutchlow, Bradley Smith and Pol Espargaro. With five laps to go it looked as if it could have been a Yamaha one-two, but Lorenzo dropped off after being passed by Rossi. Dovizioso stuck on Rossi’s back tyre, pipping him to the line consistently despite trailing into the last corner. However the Ducati ran wide on turn one of the last lap, letting Rossi retake the lead. Rossi stretched his lead on the back side of the track, giving him enough of a lead into the last straight to hold of Dovizioso’s challenge by 0.174 seconds. Iannone pipped Lorenzo to third whilst Marquez finished ahead of his team-mate for fifth.

Cal Crutchlow finished his opening race on the LCR Honda as the top Brit in seventh, whilst Hector Barbera finished as the top Open class rider in 15th. On their return to MotoGP, Suzuki finished in 11th (Aleix Espargaro) and 14th (Maverick Vinales), whilst Aprilia returned in slightly less style, with Alvaro Bautista retiring early on and Marco Melandri finishing 21st.