Jorge Lorenzo signed off at Yamaha by claiming victory at the final race of the season in Valencia. The Spaniard, who will move to Ducati for the 2017 season, enjoyed a dominant weekend, leading the race from start to finish. World Champion Marc Marquez finished second, whilst Andrea Iannone, who Lorenzo replaces at Ducati, rounded off the podium. 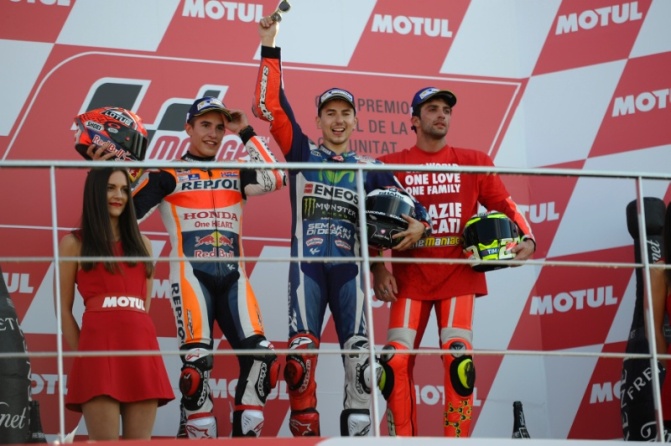 Having broken the lap record in a blistering qualifying session, it was no surprise that Lorenzo started well. Within a few laps the Yamaha man had escaped the pack, leaving teammate Valentino Rossi to challenge with Maverick Vinales and Iannone for second place.

Marc Marquez suffered from a poor start, getting swallowed up going in to the first corner, but put in a strong display to battle his way back up to second. With Lorenzo struggling in the final laps with his front tyre, it looked as though Marquez would be able to take a remarkable win. But the Repsol Honda rider left himself with too much to do, with Lorenzo taking the win by just over a second.

Rossi got the better of his future teammate Vinales as they finished fourth and fifth respectively, and Pol Espargaro edged out both Andrea Dovizioso and his brother Aleix to finish sixth.

Bradley Smith finished as the top Brit in ninth, on his final ride for the Tech3 Yamaha team. Scott Redding finished fourteenth with Eugene Laverty sixteenth. Cal Crutchlow remained the top independent rider of 2016 despite crashing out.

Having already confirmed his second Moto2 title, Johann Zarco bid farewell to the class with another victory. Sam Lowes, who is also heading to MotoGP next season, came fourth whilst Danny Kent secured a ninth place finish. It was a similar story in Moto3, as the dominant Brad Binder recovered from an early mistake that saw him drop to 22nd to take the chequered flag. 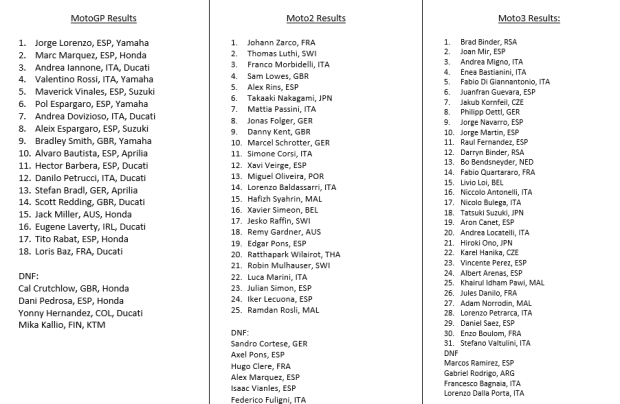 Cal Crutchlow took his second victory of the season with a dominant victory at Phillip Island. Valentino Rossi and Maverick Vinales completed the podium, whilst recently crowned champion Marc Marquez crashed out of first place on lap 10. 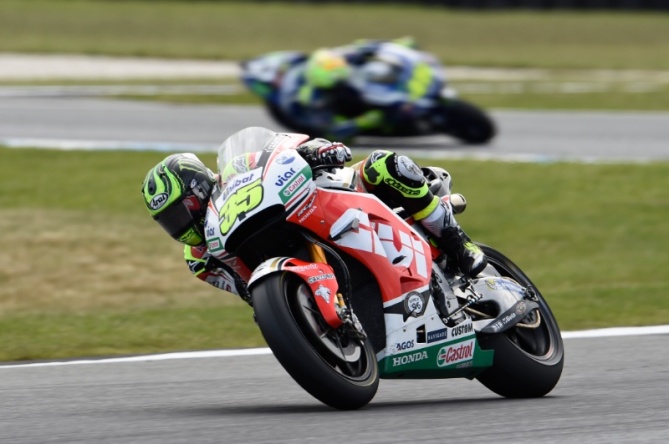 Cal Crutchlow’s victory was his second of the season, and his first win in the dry. Image: Crash.net

The Brit had started second on the grid, but found himself being swallowed up off the line. He worked his way forward through the pack to trail Marquez before the Spaniard slid out at Honda corner. Crutchlow extended his lead over Valentino Rossi to over four seconds to take his first premier class victory in the dry.

Rossi coasted to a second place having started down in 15th, keeping well clear of the scrap behind him. Maverick Vinales tussled with his team mate and Andrea Dovizioso for third, a scrap that saw Aleix Espargaro crash out. Pol Espargaro faded after a strong start, and Jorge Lorenzo rounded off the top six.

It was a good day all round for the British riders, as Scott Redding and Bradley Smith, on his second race back from injury, finished seventh and eighth. Home rider Jack Miller finished tenth, having tussled with Nicky Hayden, who was standing in for the injured Dani Pedrosa.

Thomas Luthi took the victory in Moto2, taking him to second place in the championship, 22 points behind Johann Zarco with two rounds to go. Sam Lowes crashed out early on and Danny Kent also failed to finish. Brad Binder continued his domination of the Moto3 class with his sixth win of the season. The race had been red-flagged due to a huge multi-rider accident involving John McPhee. 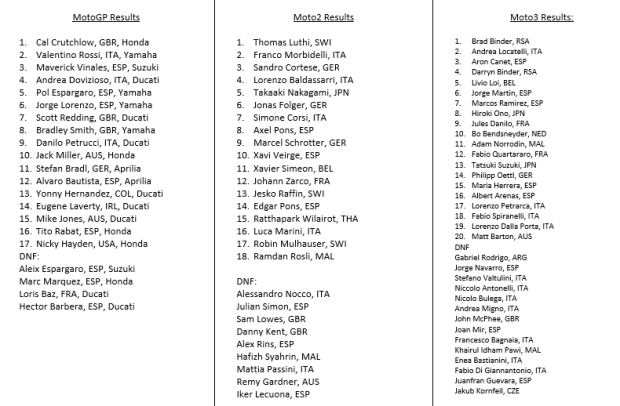 Dani Pedrosa became the eighth different Grand Prix winner as he stormed to the chequered flag at Misano. The Spaniard overcame a strong display from home favourite Valentino Rossi, whilst Jorge Lorenzo, who started from Pole, rounded off the podium. 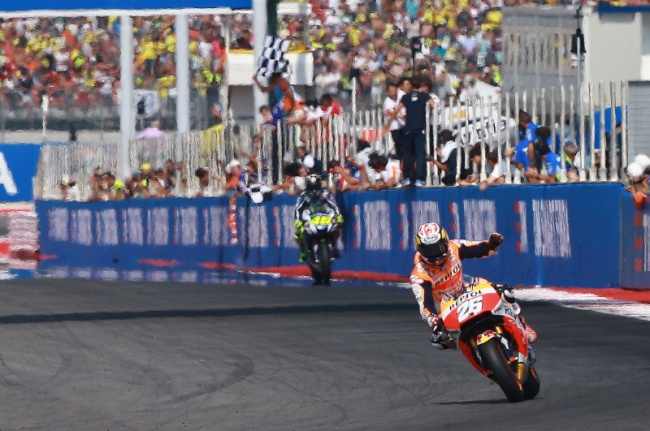 Dani Pedrosa became the eighth consecutive different winner in MotoGP this season with his win in Misano. Image: Crash.net

It was Lorenzo who made the best start, but Rossi wasted no time in hitting the front with a strong pass on the second lap. The two Yamahas broke away from the pack, along with championship leader Marc Marquez.

But Dani Pedrosa smashed the lap record three times as he caught the front group, passing Marquez and Lorenzo within three laps of each other. Pedrosa then set about closing the gap to Rossi, which stood at over a second.

The Honda rider was able to pass Rossi on lap 22, and quickly managed to gap the Italian. Pedrosa was able to extend his lead to over two seconds to take his first win since Sepang in 2015. Rossi’s second place was enough to take another seven points out of Marc Marquez’s championship lead, with Marquez finishing fourth.

Maverick Vinales followed up his Silverstone victory with a fifth in Misano, with Ducati duo Andrea Dovizioso and Michele Pirro, who was replacing Andrea Iannone, finishing sixth and seventh. Cal Crutchlow hung on to eighth, after initially being given a 1.5 second penalty for exceeding track limits, but that was later removed as he was deemed not to have gained an advantage.

Ireland’s Eugene Laverty finished 14th, just ahead of Scott Redding. Alex Lowes, who will continue to fill in for Bradley Smith at Aragon, crashed out.

Lorenzo Baldesarri overcame a last lap duel with Alex Rins to take the Moto2 win, but both Sam Lowes and Danny Kent crashed out. Brad Binder extended his championship lead in Moto3 as he took the win, with John McPhee finishing 20th. 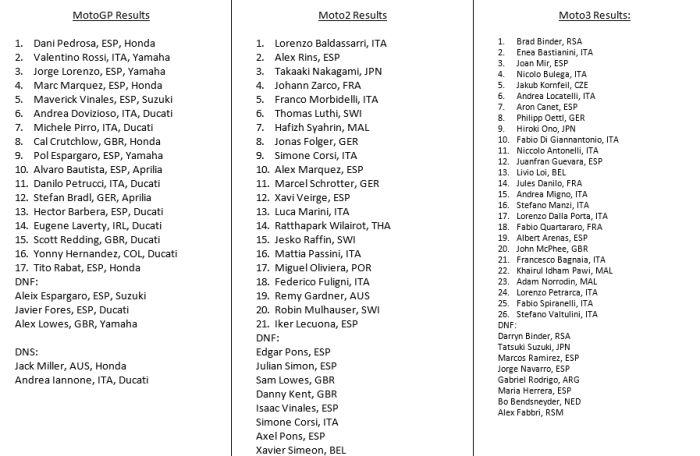 Cal Crutchlow followed up his maiden MotoGP victory with a hard-fought second at Silverstone. The Brit held off late challenges from Marc Marquez and Valentino Rossi to secure his spot on the podium for his home Grand Prix.

But Crutchlow was unable to stop a rampant Maverick Vinales, who secured Suzuki’s first win since Chris Vermeulen won in the wet at Le Mans in 2007. The Spaniard, who has already secured a move to Yamaha next year, eventually finished 3.5 seconds clear of his nearest challenger, but had managed to lead by just under five seconds during the race.

But the real battle was that for second place, with Crutchlow, Marquez and Rossi initially dicing it out. Andrea Iannone and Dani Pedrosa were hanging on to the back of this group, but it was the Ducati rider who managed to catch the leading trio, fighting his way through to second place. But the Italian crashed out, gifting second place back to Britain’s Crutchlow. Marc Marquez almost took out his fellow Honda rider, making contact with Crutchlow’s knee as at the end of the Hangar Straight.

Marquez managed to recover from that mistake to beat his teammate Dani Pedrosa to fourth, meaning his championship lead was only reduced by three points, down to 50.

Crutchlow was the only British rider to finish on the podium across the three classes. In the Premier Class, Eugene Laverty finished 12th, just ahead of Alex Lowes, who was standing in for the injured Bradley Smith. Scott Redding crashed twice, but completed the race in 17th. Sam Lowes was amongst the leading group in the Moto2, leading from Pole for most of the race, but he was taken out by Johann Zarco, gifting the victory to Thomas Luthi. The Moto3 saw John McPhee finish 18th, whilst Brad Binder extended his championship lead. 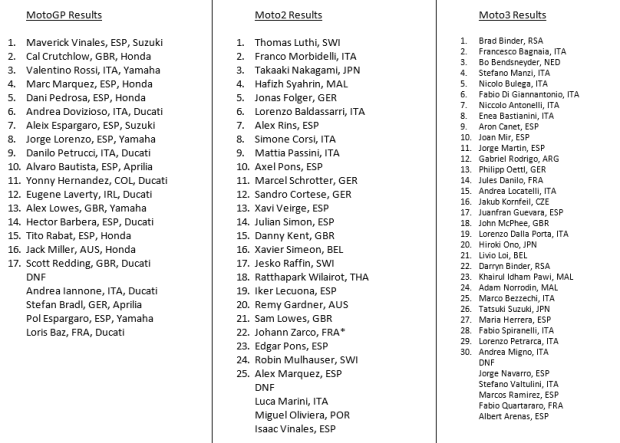 Jorge Lorenzo extended his championship lead with a victory at Mugello, snatching the win from Marc Marquez on the final straight. Home favourite Valentino Rossi was forced to retire after starting strongly from pole position. 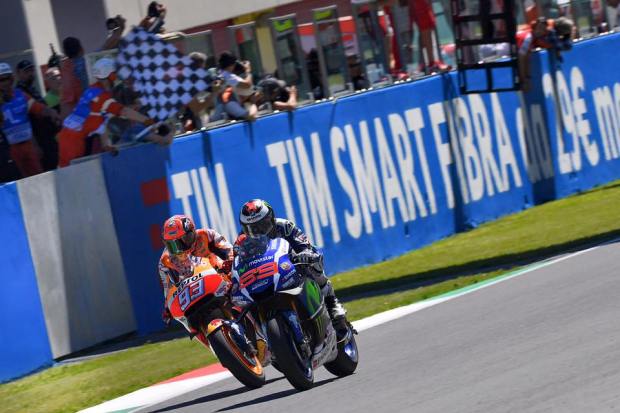 Lorenzo started strongly, leading his Yamaha team mate in the early exchanges. Rossi was just looking as if he would take the lead before his engine blew up. This left Lorenzo clear at the front, however Marquez closed the gap before eventually passing Lorenzo on the final lap. Lorenzo bit straight back but was unable to make his pass stick. It was Lorenzo who got the better drive out of the final corner and overtook Marquez, winning by 0.019 seconds.

Andrea Iannone made sure that there was an Italian on the podium, after seeing off Andrea Dovizioso and a late challenge from Dani Pedrosa, who took 4th. Maverick Vinales celebrated his move to Yamaha next season with a sixth position, with Bradley Smith and Danilo Petrucci rounding off the top eight.

The Moto2 race was disrupted after an air fence was damaged in a crash. Johann Zarco won the 10 lap restarted race with Britain’s Sam Lowes finishing third, taking him back to the top of the championship. Brad Binder cemented his lead in Moto3, taking a close fought victory in which the top six were covered by just over 1 second.

Jorge Lorenzo moved top of the championship after a dominant 10 second victory at Le Mans. Valentino Rossi recovered from a poor qualifying session to finish second, whilst Maverick Vinales fuelled the rumours about his possible move to Yamaha with his first MotoGP podium. 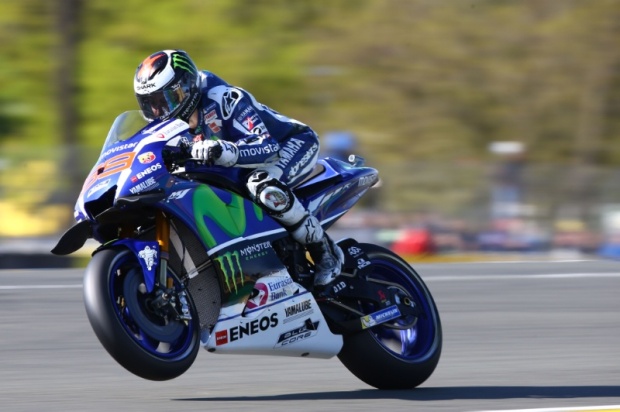 Lorenzo had qualified on pole and quickly disappeared, with no rider able to challenge his lead even in the early laps. Andrea Dovizioso, Andrea Iannone and Marc Marquez trailed to world champion, with Iannone showing the greater pace. But Iannone lost the front shortly after passing his team mate, leaving his contract for next season looking even less likely. Marquez was able to rejoin the race, managing to pick up three points for his 13th place.

Valentino Rossi managed to catch Dovi and Marquez, passing them both. He was then given some breathing room, as they both crashed almost in synchronisation with 13 laps to go. By then, Lorenzo was well clear of his team mate, so both Yamahas were able to coast to a one-two.

Vinales capitalised mostly from the Dovizioso and Marquez crashes, capping of an impressive ride with a podium, 5 seconds clear of Dani Pedrosa. Pol Espargaro finished ahead of his brother in 5th, whilst Danilo Petrucci returned from injury with a 7th place.

Eugene Laverty was the only British finisher, as Cal Crutchlow and Bradley Smith crashed out and Scott Redding retired early on.

In Moto2, Alex Rins dominated as Sam Lowes finished 6th, whilst in Moto3, Brad Binder made it back-to-back victories after his impressive showing at Jerez.