Maverick Vinales is looking in top form ahead of the start of the 2017 MotoGP season. The Spaniard, who replaced Jorge Lorenzo at the factory Yamaha team, has topped the time sheets again after the three day test at Phillip Island.

Vinales has now topped every test since his move to Yamaha (Valencia, the private test at Sepang, the Official Sepang test, and Phillip Island). Image: crash.net

Vinales was one of only two riders to record a lap time in the 1:28s, with world champion Marc Marquez also breaking the barrier. However it was the former Suzuki man that won out, topping the charts on both the second and third days and finishing 0.294s clear of the Repsol Honda rider.

It was a good test for Honda, as Dani Pedrosa, who missed the majority of day two due to a throat infection, finished third overall, and Cal Crutchlow was fifth. The LCR man was on form throughout the weekend, with a third place on day two and two fifth places. 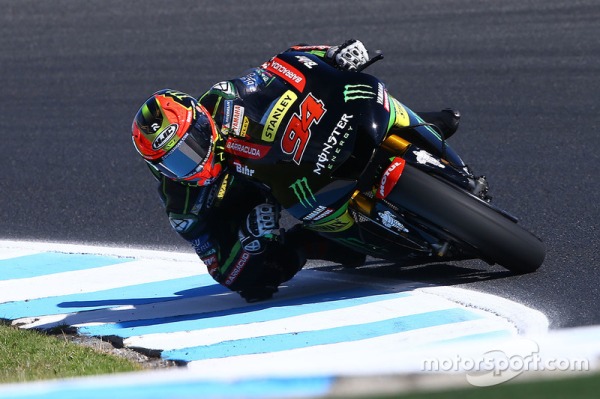 Jonas Folger finished the test as top rookie, less than half a second behind Vinales. Image: Motorsport.com

Rookies Jonas Folger and Alex Rins offered up some very promising performances, with Folger managing to shoot up to fourth on the final day. Rins managed to recover from a poor first day to best his Suzuki teammate Andrea Iannone, who struggled after a strong first day. The top rookie from the Sepang test, Johann Zarco, struggled in Australia, only recording a 1:29.67, putting him in fifteenth.

The title this year may be a two horse race between Marquez and Vinales. Valentino Rossi only finished in the middle of the pack, 0.921s behind his teammate. The Ducatis were improving though, as Andrea Dovizioso and Jorge Lorenzo finished seventh and eighth respectively.

The KTM team unveiled their 2017 livery after the Australian test. Image: crash.net

It was a miserable test for the other Brits, as Bradley Smith, Scott Redding and Sam Lowes occupied three of the bottom four places. Smith and Pol Espargaro both showed signs of improvement on their KTMs, finishing half a second closer to the leader than they did at Sepang. Sam Lowes also improved on his Aprilia, despite not breaking the 1 minute 30 barrier, as he was 0.3 seconds closer to Vinales.

The final MotoGP test will be at Losail, Qatar, from the 10-12 March, with the season kicking off at the same track on 26 March.